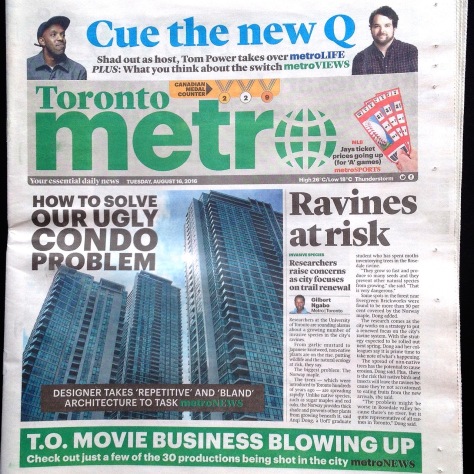 In one of our study plots in Rosedale Valley, 90% of the woody stems were identified as Norway maple, one of the most invasive species in North America. (Read more about this species from our previous article: Norway Maple (Acer platanoides): when street trees break bad.)

On the other hand, we have also found some big old oaks that are producing large amount of acorns, but we haven’t seen too many young oaks in the ravines. Why aren’t they regenerating? Is there any other reason besides the squirrels and Norway maples? Our team is starting seed forecasting on these oaks. Fall is about to start, the oaks are ready to help us revitalize the ravines, and vice versa.

We finished surveying Burke Brook Ravine (our control plot) last week and it had one very distinctive feature, the presence of conifers and one conifer in particular the Eastern White Pine, Pinus strobus. The Eastern White Pine is the provincial tree of Ontario and for good reason, the tree helped to drive the early economic engine of the province but in order to understand why we must first look at the ecology of the species. Pinus strobus is the tallest tree in eastern North America and is fire resistant which is why mature trees have no branches on the lower trunk. It is one of the most easily recognizable Pine spps as it is the only one with bunches of five soft needles.

When settlers first arrived in Ontario, White and Red Pine were one of the most common species, so White Pines were tall, straight, fire resistant and abundant which made them the perfect lumber for the British Navy because they made perfect ship masts and when Napoleon cut off their timber supply in the Baltic ports, the White Pines of Ontario became an very valuable resource indeed. White pines were heavily logged from the 18th century into the early 20th century and the impacts are still being felt today. In the Haliburton forest region of Northwestern ON, White Pine (Pinus strobes L.) was reduced from 11.5% in 1863 to less than 1% in 1999 due to logging and fire suppression while shade tolerant species like the American beech (Fagus grandifolia) and Sugar Maple (Acer saccharum), have increased from 34.5% in 1863 to 62.8% in 1999. This shift in forest composition in Haliburton forest follows a greater trend in the Great Lakes-St Lawrence forest within Ontario in the last century where logging in conifer stands has allowed for the regeneration of shade-tolerant hardwoods and it is a trend that continues in the Toronto Ravines.